Recently a few photos were shared on a WhatsApp group that I was part of with a question, “guess where this was taken?” Those happened to be pictures of people thronging IKEA’s first store in India. A weekday didn’t prevent 40,000 curious customers from trooping in to see what the hype was all about.

This craze to visit the store persisted and by the weekend, IKEA put up a live ticker on its homepage and social media updates urging people to plan their visits by checking how long it would take for them to get inside the store. They also had to hire 3 external parking lots 3-4 kilometers away with free shuttle services to ease traffic congestion near the store.

How did IKEA manage to pull in such massive crowds to the store launch and then sustain it? Will their typical large “blue box” format work in India? How do they stack up against competition? More importantly, will they succeed in instilling a DIY culture among shoppers, or, as another WhatsApp forward in the group went, “will people use IKEA’s free Wi-Fi to WhatsApp measurements and pictures of the furniture to their carpenters?”

Read on for our assessment from a quick visit to IKEA’s first Indian store.

“We are really going all (out) in India,”
– Patrik Antoni, Deputy Country Manager, IKEA India

IKEA had clearly planned and built up this euphoria. One of the first things they did after applying to open stores in India in 2012, was to put in place a marketing team. The team first researched consumer preferences before getting agencies on board to work on their first media campaign.  And, every small decision was made newsworthy by their international PR team.

Almost a year ago, they opened up an experience centre called ‘Hej Home’ to give a touch-and-feel taste of IKEA to Hyderabad. Beginning this year, they hired a PR agency dedicated to India.  A few months before the store opening front-page newspaper ads were followed by their TV ad and the city continues to be plastered with their billboards and posters. They also tried various publicity stunts to generate PR including putting IKEA branded cartons on airport conveyor belts, giving bus shelters an IKEA makeover and a VR tour of the store in an auto ride. 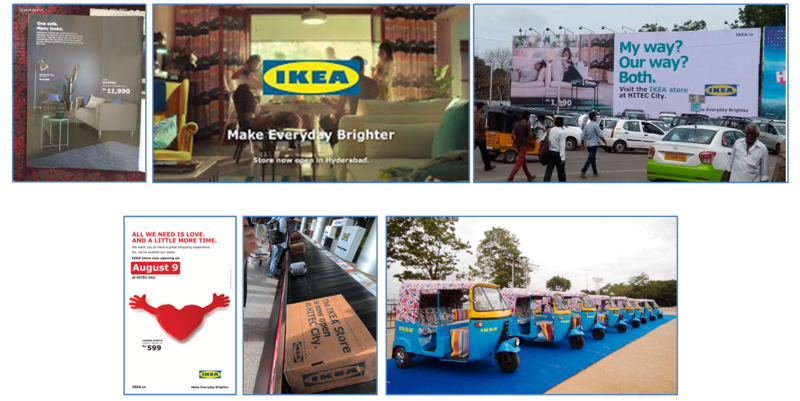 While these are still early days, this “all out” approach has clearly worked for IKEA India. Their existing brand perception and marketing efforts have generated sustained interest and driven footfalls to the store in the last month or so. Such has been the 360° marketing blitzkrieg that the awareness of the brand in Hyderabad went from 5% in 2016 when they started building the store to 80% by the time it opened in 2018, and they signed up nearly 1.7 lakh IKEA family members in India of which 20,000 were from outside Hyderabad.

The store retains the typical IKEA blue box style – massive, experiential, relaxing but with an emphasis on self-service all at the same time. The snaking walk through an uncrowded 400,000 sq. ft. store built on a 13 acre site in the heart of the IT hub in Hyderabad takes more than an hour. You are made to see each and every room in the ‘showrooms’ before entering the ‘market hall’ to check out the odds and ends for a home;  then walk through the warehouse / self-serve area to pick up the flat-packed items you’ve chosen and proceed to checkout. There is of course the massive 1000 seater restaurant with children’s play area right before this winding journey and another snack bar and play area after checkout.

In a day and age when the slant of debates about retail favor online and e-commerce – with a recent tilt towards omni-channel – this is a welcome change. The next IKEA, in Mumbai, at 500,000 sq.ft., is going to be even bigger! These massive physical IKEA’s are going to  beat the Home Town’s, Home Stop’s, Home Centre’s, @Home’s and Interio’s hollow, and  give tough competition to the Urban Ladder’s, Pepperfry’s and even the Amazon’s of the world.

“This (concept) is all new to the people”
– Mia Lundström, Creative Director, IKEA India

The research done via the 1000 odd home visits to understand consumer habits, practices and preferences seems to have given the team a great understanding of the average Indian’s  price sensitivity. The emphasis on affordability starts right from the mass media communication and it permeates through the store where the price tags are as prominent as the furniture and articles themselves.  As soon as you enter, a bin with colorful plastic spoons priced at Rs.15 screams ‘bargain’ and the price tag on all items show a selling price 15-40% lower than an illusory MRP. There is of course the Hyderabadi Dum Biryani priced at Rs.99, Samosas at Rs.10 (both of which are apparently their hot sellers) and hot beverages at Rs.40 with free refills.

The DIY philosophy and the nudge to break the lazy, pampered Indian shopping habit and shopper too is visible. While the furniture assembly service is available, its price is clearly demarcated on the price tags to nudge the bargain hunters to do some work themselves. The store is peppered with boards and touch screens educating customers how to read the labels to pick up the product in the self-service area.  The army of 800 in-store staff is conspicuous by their absence. The ones at the help desks are seen urging customers to use the companion IKEA app or go on the website to know more about service terms and conditions. This nudge is even more prominent near the automatic checkouts, with power tools being one of the prominent items displayed there. After checkout the customers are guided to desks to do their own bubble and gift wrapping; or to touch screens where they can book delivery or an assembly service by themselves.  I am not sure if this is part of their DIY nudge, but it is one of the few brands which has launched without a Twitter presence. (Twitter is fast becoming the go – to place for Indian customers to air their frustrations and get a brand’s attention for support.)

But this tough battle against a non-existent DIY culture is something that IKEA also seems to be acutely aware of. They’ve already anticipated the demand for allied services and invested heavily in those just in case this DIY nudging doesn’t work. The tweaks for the Hyderabad launch include employing a 150 member strong in-house assembly team and tie-up with GATI-KWE for home delivery services and Urban Clap for further installation services.

Overall, they seem to have put in place a solid ecosystem to educate and help the shopper – from in-store communication, delivery or in-home service, to the web/app/e-commerce backbone which supports customer education, returns etc. I have no doubt that the price sensitive Indian customers (or at least a section of them) will wake up to the DIY culture and learn to take home, assemble and maintain their own furniture. (Though one of their rivals, Home Town, is banking on the opposite and had banners outside IKEA emphasizing the service offered.)

But, there are a couple of issues that begin to show once you enter their store. The first is, in their zealousness to localize the product assortment and focus on affordability to match local preferences, they seem to have cut down on the global bestsellers among the 7000 odd items they carry instore. The concept rooms do highlight the space saving concepts, safety features and aesthetics that IKEA is famous for, but a majority of the furniture in the rest of the ‘showrooms’ can only be described as ‘underwhelming’.

The second but bigger issue is their assumption that a consumer entering the store is wedded to the brand IKEA. Everything in their store, in-essence, is a private label and they simply don’t carry an item they can’t make or brand as their own. This also limits their assortment. If you are doing a full home makeover, this store falls short of a Home Town in its heydays which packed in what seemed to be better, branded assortment in a far tighter space.

ps: All images are sourced from social media and the internet.